The Invisibles volume 1 issues 5 to 10 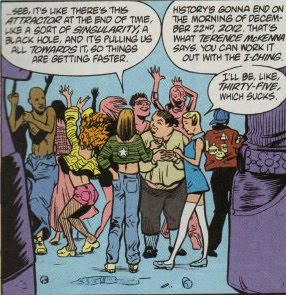 The ARCADIA arc reflects the genesis of The Invisibles.

There was tour in 1993 to promote the early Vertigo books - such as The Sandman and the Sebastian O mini-series by Grant Morrison and Steve Yeowell. These two guys were on the tour, along with Jill Thompson who was promoting The Sandman. They talked together about doing a Morrison-penned series.

The rave in San Francisco they went to during the tour, during this was one specific event Grant's ideas for the series came together. This from an interview-excerpt with Grant Morrison in Chapter 1 of Anarchy for the Masses - see the "Further Reading" section from Month 1:

"I realised I had to talk to the mass culture which was emerging at the time, the psychedelic culture based on the dance culture that had hit America. That was '93, so it kind of big in San Francisco at the time". (The other big realisation regarding what the The Invisibles would be "about" was Grant's experiences in Kathmandu which will be discussed in another "Roots" section".)

The artist for the first four issues is Steve Yeowell; the artist for the next four issues is Jill Thompson. Just as King Mob eventually, gradually, became the avatar within the book for Grant Morrison, Ragged Robin was drawn as Jill Thompson by Jill Thompson, though from the beginning. (She had produced concept drawings for all five of the main characters, though Steve Yeowell got to draw King Mob's appearance as those concept drawings all featured a masked King Mob.)

There are also historical events, poems, and novel, and a painting which are all the roots of ARCADIA, these will be mentioned in the "Thoughts" and "Annotations" sections...


-- "I think that everything I do now is The Invisibles":

Batman - The four characters of the novel 120 Days of Sodom - Morrison adds in a fifth, The General, for ARCADIA, and these five characters can also be seen in these panels of Morrison's Batman #680.

DWM comic stories - One of the stories in the Doctor Who collected edition The World Shapers features the Cybermen, and those monsters seem to be the model for the Cyphermen of The Invisibles ARCADIA, monsters keen that others should "be like" them.

Final Crisis - The ultramenstruum, the extra-dimensional silver lifeblood between universes seem to be very similar to the "magic mirror" fluid of issue The Invisibles #10.

Zenith -  The mention, The Invisibles #9, of Tsathoggua, an entity of Lovecraft's Cthulhu Mythos, and same scene has the idea of entities using specially created vessels to manifest in a universe.

So, after the first four issues which included discussion of the Russian Revolution (specifically criticism of it by Kropotkin) and included the revolutionary Sixties as symbolised by John Lennon and also featured the "revolution of the head" that Dane undergoes - these next four issues focus on the theme of revolution again.

The French Revolution and its aftermath the Reign of Terror, (the actual events and the Byron and Shelley philosophising about the events 25 years later), and, with the San Francisco sequence of issue #8, H.E.A.D., the Sixties revolution again with its then-contemporary (contemporary when The Invisibles was published) echoes of the Nineties.

Grant Morrison writing on the "Invisible Ink" letters pages of issues #5 and #9 give an idea of the "why" for ARCADIA.

'The theoretical scaffolding for the entire INVISIBLES series is revealed herein, but I'm not still not sure whether people will actually want to persevere with page after page of rambling historical bullshit.'

'I felt the "cultural walkthrough" of the ARCADIA storyline was necessary in order to set up the historical and thematic framework of the series'.

So The Invisibles then seems to have a central theme of revolution, revolution with utopian goals, though page 1 of the four-part ARCADIA arc introduces another theme, that of the blurring of the supposedly opposed "sides" of the turmoil.

Of the puppet show on page 1 - "His skill makes us believe that we see a war between two great armies, but there is no war. There is only the Dalang".

Some other quotes from issue #5 on this theme...

Percy Bysshe Shelley speaks of Blake's 'Mind-forg'd manacles' and of gods and devils. "We must do away with them and stand up tall."

Dane - "How do I know I haven't joined the other side?"

The second-last page has the pianist saying "Can it be the same hand which plays both white notes and black? My skill is gone. Black wars with white. Keys like chessmen. I would play for you but that my arms are burdened so with these chains". The silhouette of the Pope's blessing he makes is that of a horned devil.

So what does it all mean? "There is no war"?

Now, I've writing this having read the first 30 issues of the 59 issues before (though I've also read the big Morrison interview of "Anarchy for the Masses" which alludes to later issues, the book mentioned in month one), so it will be interesting to read how this "thematic framework" of the series ultimately plays out.

The plot of ARCADIA is minimal - King Mob's group's mission is to bring a  "projection" of Sade to the present-day to help them win against "the enemy", the "other side", to help them "put together a blueprint for the future of humanity".

Regarding the two sides, it seems, broadly, that one of them - the Invisible College, that is, King Mob's side - stands for liberty, equality. The "other side" stands for control and tyranny. With 120 Days of Sod All, the Banker & Judge & Bishop & Duke would seem to represent that "other side" with their tyranny over the castle.

In that issue #7, Sade explains that his "120 Days" is meant to show "the hypocrisy of the Enlightenment. These are the monsters bred by the god of reason. Idealists and reformers all executioners in their turn". (An idea that was shown by the previous issue Mysteries of the Guillotine.)

The last issue of ARCADIA ends with Sade in the 20th Century assembling his "experimental community", his chateau.

His latest recruit speaks the last line of ARCADIA, "And in my mind, I see the sun rise on a new and better world", and as Sade regards the tyrants of the castle as "monsters", and he's supposedly with the "good side", The Invisibles, presumably there will be no tyrannous reign but a liberated community? Though as ARCADIA seems to suggest, the sides seemed to be blurred.

All this ambiguity though in the series The Invisibles, there is less ambiguity in the real world and Shelley's words in this series "One day men and women will be equal and free from tyranny, free of God and fear, and we will have have helped to hasten that day with our words" reflect that the 21st Century Europe is a much better society than that before the Enlightenment.

#5 - page 1 - "His skill makes us believe that we see a war between two great armies, but there is no war. There

#5 - page 2 - P. B. Shelley's "Julian and Maddalo: A Conversation", which begins vaguely as the next page begins.

#5 - page 3 - "There's a painting by Monsier Poussin, the Frenchman. It shows three shepherds and a shepherdess in a ideal landscape". The first mention of the painting "Les Bergers D'Arcadie".

#5 - page 4 - Shelley: "One day men and women will be equal and free from tyranny, free of God and fear, and we will have have helped to hasten that day with our words". Byron: "It begins with fancy words but always end in blood. Think of the Terror in France, the hideous mountains of severed heads."

#5 - page 5 - Shelley: "It's our responsibility not to fall prey to cynicism and despair, George. The utopia I speak of lies in the imagination. It is not built, it grows."

#5 - page 6 - Another mention of Ganesh, "the god who breaks down obstacles", "nine's his number". (Refer to the Lennon Godhead sequence of issue #1.)

#5 - page 9 - "A member of the Invisible College, as we are", including Byron and Shelley seemingly in The Invisibles.

Mysteries of the Guillotine

#6 - page 14 - The character of the "chess-player" gives Mary Shelley (author of Frankenstein) an apple. It's 25 years after the Reign of Terror. So 1818 which fits with the historical Shelleys.

#6 - page 15 - "Tell me, have you heard of the Inivisible College?" They are "dedicated to the ideals of liberty".

#6 - page 20 - "Oh Liberty, how many are the crimes committed in thy name?" Madame Roland was part of the movement that led to the French Revolution but was judged to be of the other "side" and executed for treason during the Reign of Terror in 1793.

#7 - page 1 - "The Banker", "The Judge", "The Bishop", "The Duke", the same characters of De Sade's "120 Days of Sodom", as King Mob and Boy and De Sade must journey through one of De Sade's own fictions, though it's slightly different from the original.

#7 - page 3 - The issue title "120 Days of Sod All" of course being a version of the title of De Sade's story, and the image of this page is "Les Bergers D'Arcadie", they are in both the story and the painting, via the "ontic sphere" whatever that is.

#7 page 15 - The chess-player mentions a reproduction of "Les Bergers D'Arcadie" being purchased by Sauniere.

#7 page 24 - The "lost treasure of the Templars" is usually thought of the Holy Grail but it's apparently "The head of John the Baptist" (still a Jesus connection however).

#8 - page 1 - Another revolution. Timothy Leary and Ken Kesey and the "magic bus".

#8 - page 3 - "He was talking about revolutions. Or the revolution. I suppose there only is ever one". 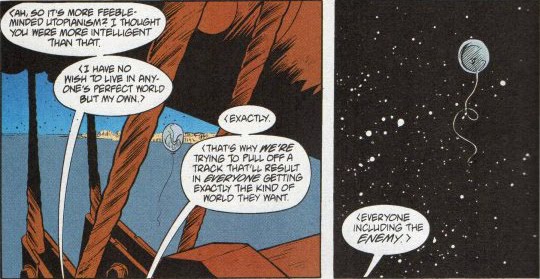 #8 - page 6 - After saying "We hope you're going to help to put together a blue-print for the future of humanity", "we're coming up on the apocalypse at last", King Mob expands on the reason for bringing Sade to San Francisco.

#8 - page 11 - Ragged Robin explains another reading of the phrase that gives the arc its title.

#8 - page 16 - "Hedonic Engineering and Development". (A Robert Anton Wilson idea.) The new revolution. "From one bunch of heads to another in two hundred years".

#9 - page 1 - Tsathoggua is an entity of Lovecraft's Cthulhu Mythos.

#9 - page 2 - The title 23: Things Fall Apart is a combination of a quote from "The Second Coming" by Yeats, and the I-Ching hexagram 23 which means "Splitting Apart" appropriately enough as King Mob's group is spit in this issue.

#9 - page 3 - The character of "John" that King-Mob-with-hair is talking to seems to be the member of the group that Dane is replacing.

"For elements of this month's story..." says Grant:

"Occupy London has started a conversation that can't be stopped" (guardian.co.uk)