The Invisibles volume 2 issues 5 to 10

(Bolland's cover is new for this. It imagines the five of Ragged Robin's cell as some sort of pop group, like the Beatles or Queen, recalling those groups' imagery.) 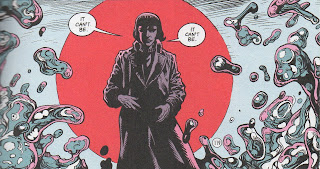 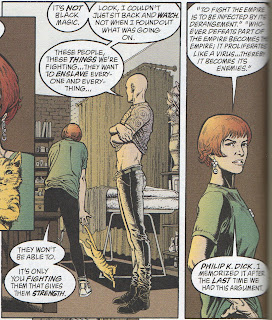 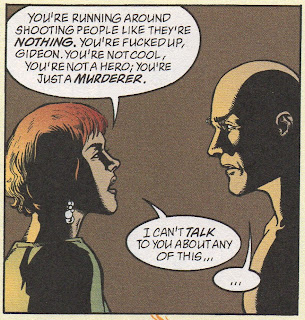 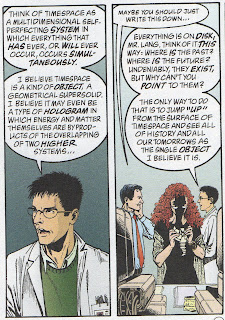 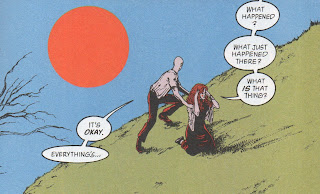 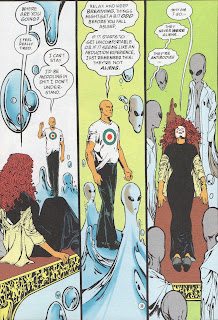 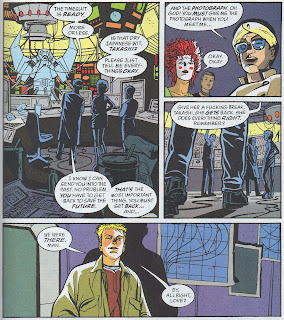 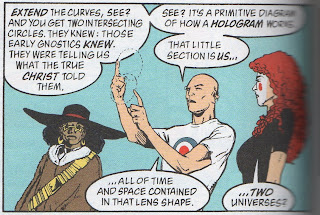 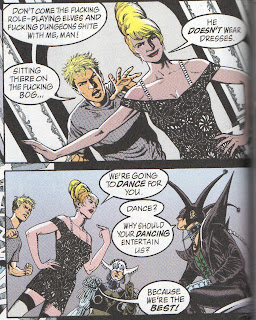 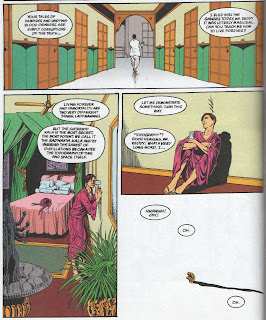 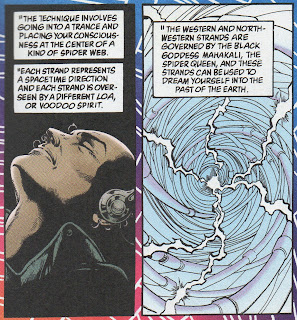 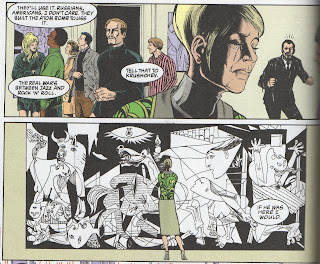 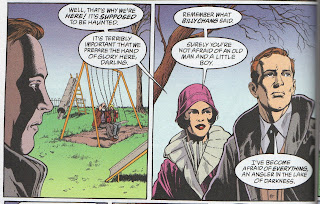 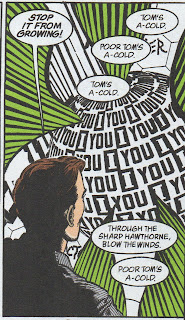 
A three-issue arc of Time Machine Go, The Girl Most Likely To, The Sound of the Atom Splitting.

v2#5 page 5 – what the television news is saying of the Aum Supreme Truth cult in the top two panels is actual news.

v2#5 page 8 – So King Mob has sent Dane and Hilde "on a mission, yeah?" (To retrieve the Hand of Glory.) How does King Mob know about it, what does he think it is, why does he want it? These six issues (starting with this issue) seem to make it clear King Mob has no clue about what it is. However, volume 1's issue #9 has a flashback to King Mob and John A Dreams chatting about the Hand of Glory, and "Universe B", so he does have some sort of clue?

v2#5 page 11 – one of the Panels of the Month – left handside of the page what would appear to be Gideon & Jacqui dressing up as "Gideon Stargrave" & "Genivieve". Gideon has spiky hair in the last panel like ENTROPY IN THE UK.

v2#5 page 13 – one of the Panels of the Month – "you're not cool, you're not a hero" - the comic The Invisibles has been suggesting this for a while.

v2#5 page 16 – one of the Panels of the Month – compare the description of the idea of 'jump "UP" from the surface of timespace' to the King-of-All-Tears rotating the supersphere in the final issues of volume 1.

v2#5 page 17 - so it is Takashi's grandfather who "makes the final fold" of the origami, it isn't sent back in time as Takashi thinks and says (on previous page), but rather created by his grandfather. Will this ever be explained?

The Girl Most Likely To is issue #6.

v2#6 page 2 – One of the Panels of the Month  – BARBELiTH in the sky.
v2#6 page 3 – "Go. We've been scanned. We can pass" - BARBELiTH turning green for "Go."
page 4 - a small background detail, but hugely significant, is the zeppelin above the Invisible College. It suggests that when those zeppelins appeared in the sky of during DOWN AND OUT IN HEAVEN AND HELL that Jack and Tom were in the BARBELiTH universe.
v2#6 page 5 – "Tom O' Bedlam showed me, way back. I think he showed Jack how to do it too".
v2#6 page 7 – one of the Panels of the Month. "They never were aliens. They're antibodies ..." Compare to Jack's "alien abduction" issue in DOWN AND OUT IN HEAVEN AND HELL and Quimper being taken to the Outer Church issue in BLACK SCIENCE  for a similar process except they weren't healing as such but "improving" Quimper.
v2#6 page 8 –  new century, new artist drawing the pages.
v2#6 page 9 – "all will be well, all will be well and all manner of things will be well" is Toby in the last panel quoting from T S Eliot's The Waste Land.

v2#6 page 11 – "The ancient Mayan calendar runs out tomorrow at 8am" & Terence McKenna's Timewave graph - these ideas were mentioned in ARCADIA.
v2#6 page 12 – one of the Panels of the Month. Of the five of the 1990s Invisible cell of volume 1, only Hilde and Dane are with Ragged Robin, King Mob and Boy are not seen in this future. Dane of 2012 is saying he saw Ragged Robin "get back" from the past of the 1990s, back the future of 2012. (Something we the audience haven't seen yet).

v2#6 page 13 – Dane saying "I've got to get back to Liverpool to meet the Buddha on the road" - we've seen him speaking to someone on a Liverpool road in the last few issues of volume 1.
v2#6 page 18 – "...Phoenix has landed... ...confirm reentry..." - this is Ragged Robin is this panel then, "getting back" to the future? The panels above and below are here saying - "I HAVE to get back".
v2#6 page 19 – "You're thirty three" & "Christ, you're brilliant" another way of saying Ragged Robin is sort-of like Christ?
v2#6 page 20 – The explanation of what the photographs means is really weird and convoluted, even for this series The Invisibles.
v2#6 page 21 – one of the Panels of the Month, the "Vesica Piscis".
v2#6 page 22 – Animal Man-esque page shenanigans.
v2#6 page 23 – "It was all those Moorcock books; I wanted to be Jerry Cornelius, the English Assassin. I wanted the guns and the cars and the girls and the chaos..." - Grant several issues after ENTROPY IN THE U.K. acknowledges the inspirational material
v2#6 page 24  – note the (ringed) red circle of BAREBELiTH; the red circle of King Mob's mod T-shirt; the red circles of Ragged Robin's make-up.

The Sound of the Atom Splitting is issue #7.

v2#7 page 16 – one of the Panels of the Month. "Don't come the fucking role-playing elves and fucking dungeons shit with me, man!" – Dane.

v2#7 page 21 – "D'you remember those weird things coming in? Like blobs" – so when Dane and Hilde are given the Hand of Glory, the Magic Mirror blobs seem to have been summoned.

v2#8 page 3 – "I believe in the modern world, Mr Skat. I believe in the automobile and the Charleston and the dry martini. I believe that nothing we know will ever be the same again" – Edith. King Mob will express similar sentiments in the next issue.

v2#8 page 22 – one of the Panels of the Month, [spacetime direction says Gideon]

Mad Dogs and Englismen is issue #9.

v2#9 page 8 – "This is when the future started: James Joyce, T.S. Eliot, Picasso, black music, drugs and dancing..." – King Mob. An echo of what Edith said to Mr Skat (v2#8 page 3) and we've seen (or will see with rest of the arc) each of those six things represented on the pages of The Invisibles...

James Joyce - DOWN AND OUT IN HEAVEN AND HELL is a kind of Ulysses for London.

black music - Jazz this arc, and Hip Hop in previous issues of volume 1.

dancing - Dane and Hilde dancing in the last arc.

v2#9 page 13 – one of the Panels of the Month, "It can't be. It can't be", just before givin the Hand of Glory to Edith, the Harlequin shows BARBELiTH to Edith while Magic Mirror swirls about. Compare to how Dane describes when he and Hilde are given the Hand of Glory (v2#7 page 21) – "D'you remember those weird things coming in? Like blobs".

v2#10 page 4 – "Edith says to call him Boody" – from volume 1, it's the first King Mob rather than Edith observing this, it's still no clearer what it's supposed to mean, unless it's supposed to mean Edith also was "there" but we didn't see that event. (That still doesn't make sense.)

v2#10 page 7 – one of the Panels of the Month, [same scene different perspective from DAOIHAH]