These issues are the first four (of the nine) of the third collected edition "Entropy in the U.K." -  pictured.

Elfayed: 'Things repeat themselves on all scales, from the smallest to the largest. "As above, so below." ' 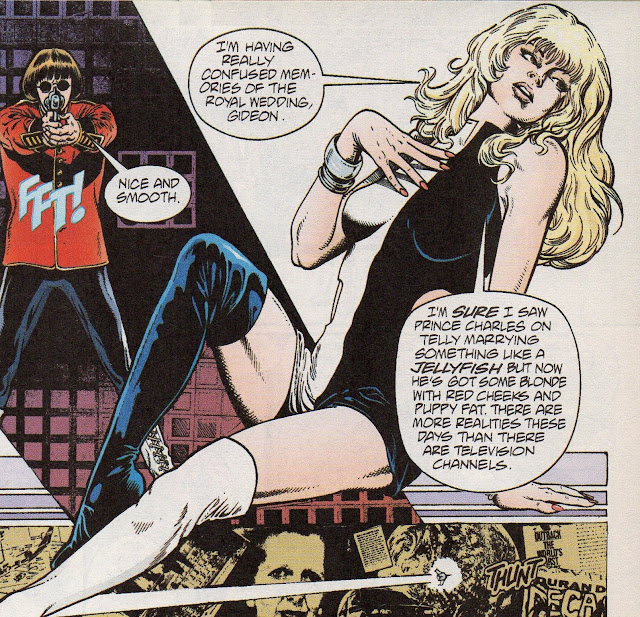 
Reading ENTROPY IN THE U.K., anyone familiar with Michael Moorcock's Jerry Cornelius stories will understand the main influence, as the similarities between that character and “Gideon Stargrave” are many. (The dandy assassin with a sister/lover hopping between worlds to say the most basic).

Whether this is a homage or not or was a homage is exactly won't be debated by this analysis - but will say it's not just as simple as Morrison basing Stargrave on Cornelius.

The vague timeline of both Kirk Morrison and Grant Morrison's life (born at the start of the Sixties, spectacular writing success in 1988) is discussed more in the annotations of issue #19.

It's not just Morrison's comics from 1978 that are things from his life that feed into these storylines. The Kathmandu experience was mentioned in the “Roots” section of month 3.

The Scorpion experience and the Roots of  #17, #18, #19 - Morrison had been trying out some Voodo communication as part of the writing for the Jim Crow character. Somehow these Scorpion gods "spoke" to Morrison, he used some of the ideas for the comic. Soon after, he collapsed with staphylococcus infection.

So Morrison regards the tribulations of King Mob in these issues as somehow merging with his life which is appropriate considering the themes of the storyline.

The roots of #20 are partly PKD as the annotations will explain.


-- "I think that everything I do now is The Invisibles":

Gideon Stargrave (before The Invisibles) starred in two stories. A 2-page story “Famine” in the Food For Thought anthology but before that...

The three-part THE VATICAN CONSPIRACY, with parts 2 and 3 having the episode titles Prelude to Ragnarok and The Fenris Factor.

(Each part was seven pages and the mini-epic was published in issues #3 and #4 of Near Myths.)

Some panels that are particularly relevant to The Invisibles...

Episode 1 page 1 – Gideon Stargrave and perhaps Genevieve, and also Lennon and another Beatle. Plus the Moon. The Invisibles in one panel on page one of Grant's earliest epic? 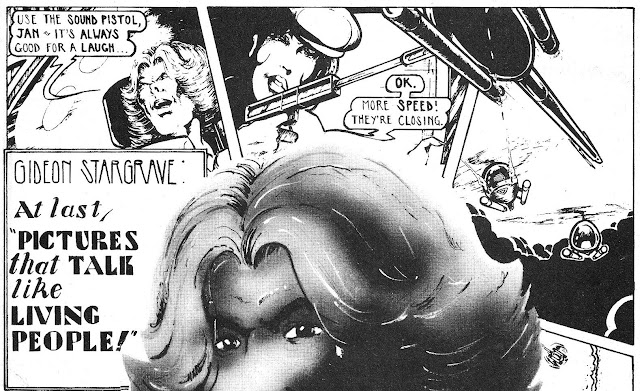 Episode 2 page 1 – a remix of these four panels appears at the start of The Invisibles issue #17. 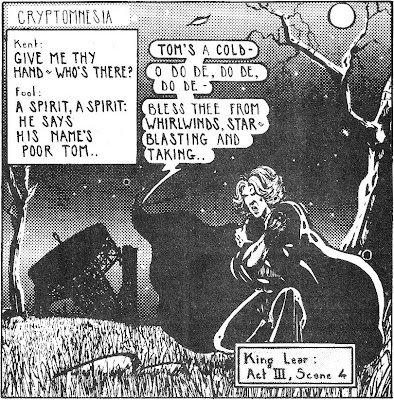 Episode 3 page 2 – the hero portrait seen again on page 2 of issue #17 of The Invisibles with the same costuming. 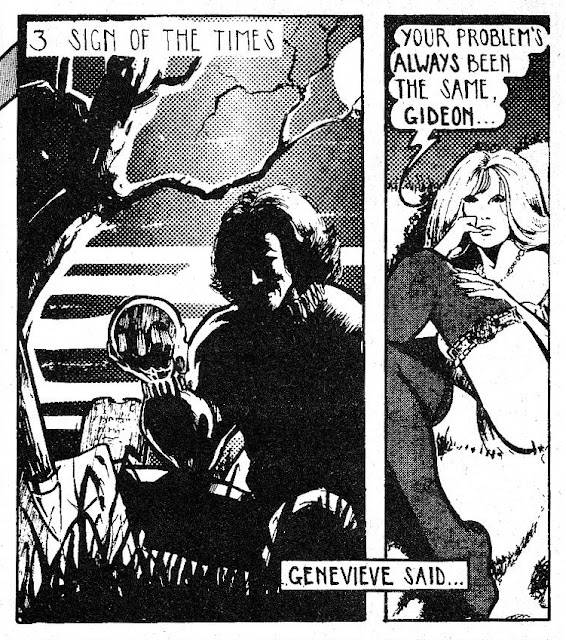 Dare – The destruction of London of #17 page 7 recalls a similar scene in Morrison's version of the Dan Dare story.

Zenith – The extra-dimensional entity summoned on #17 page 13 recalls a similar scene in one of the interludes between Zenith Phases I and II.

At first glance these two stories - the three-issue arc starring King Mob and the one-issue tale of how Boy "became Invisible" - are very different. One showcases the outlandish and sparkling Gideon Stargrave, the other has the dull throb of grim conspiracy theories running through it, with "Rex 84" being an actual thing (although the disturbing prison camps of the story seem unlikely).

Reading these issues in the 21st Century though (they were published in 1996) after the events of September 11, 2001, and all that happened after - and they are similar in that they both have echoes of this uneasy new century.

Reading Gideon Stargrave comandeering a plane towards the Pentagon, or toasting the destruction of an American city skyline, you can't but think of the events of 2001 (which were obviously tragic real life events not to be celebrated while the Gideon Stargrave stories remain outlandish stories, but slightly less outlandish now).

The "Gitmo" camps, Obama tried to shut them down, but they still exist. Obviously they are nothing like the camps shown in issue #20, but was anyone thinking in the Nineties that America would choose to have such things? 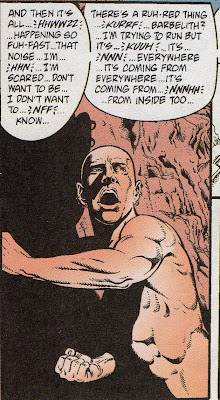 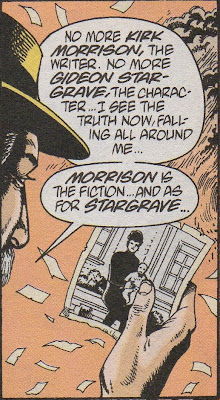 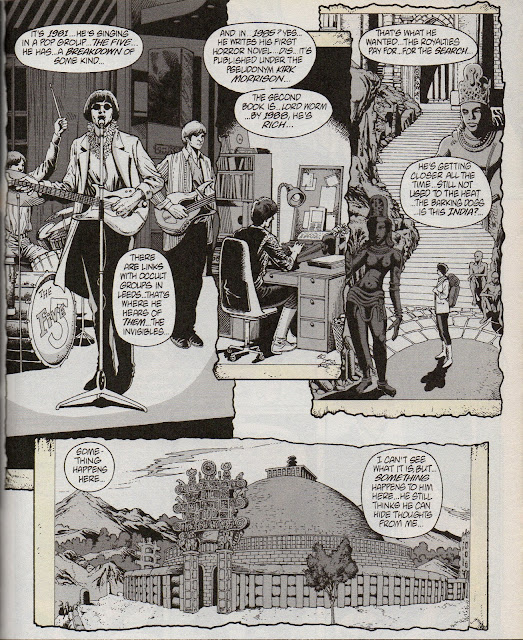 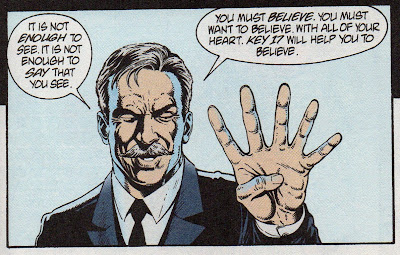 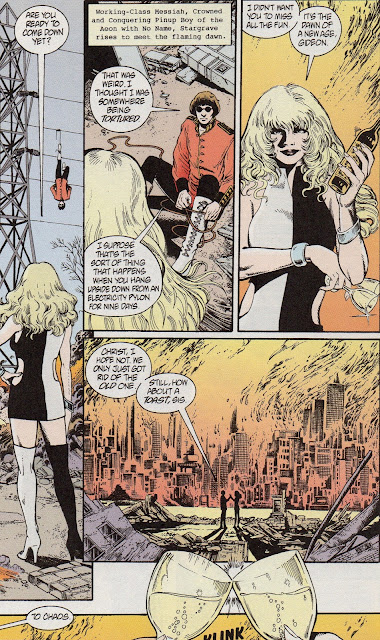 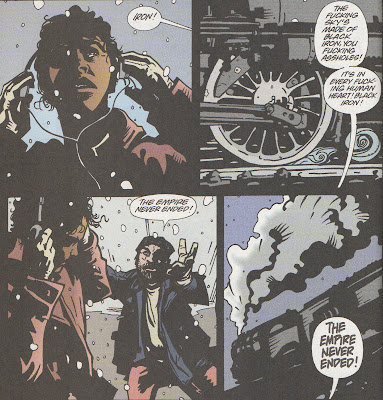 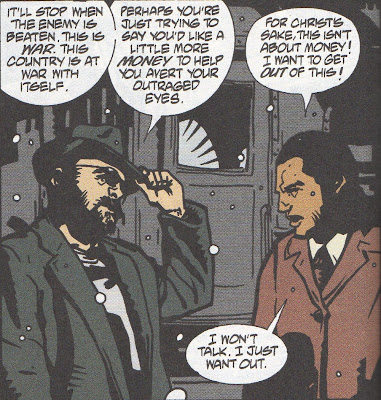 #17 page 1 – this imagery of a helicopter action sequence over the Thames is straight from the main Gideon Stargrave story, (refer to the “Everything...” section), though in this version it's speedboat versus helicopter rather than helicopter versus helicopter, and “Jenny” rather than “Jan”. Pink Floyd “post-Syd” dates it to after April 1968.

#17 page 2 – each of the 3 parts of ENTROPY IN THE U.K have as their page 2 a splash-page of  a character.  Also each issue's Sean Phillips cover features the same character. This issue it's Gideon Stargrave of the 1970s. Note that the original Gideon Stargrave story is “1970”.

#17 page 3 - “Gideon sets the controls for the heart of the Sun", (refer to the Song of the Month” section). As well as paraphrasing a famous song, it resonates with the Red Sun-like disc of what we recognise as BARBELiTH.

Just as Dane and Lord Fanny have had to “brave the jaws of the dragon” this is apparently the equivalent event for King Mob, which also combines storytelling of their initiation into The Invisibles and their encounter with BAREBELiTH.

However it's slightly different with King Mob. That's the only time we see the red circle on the pages of these three issues. There is an equivalent “Shamanic ritual” - Ayers Rock in issue #18 for King Mob but unlike the other two characters the red circle isn't shown to us as part of the sequence, though the word BARBELiTH is mentioned on the Ayers Rock page if not the red circle image.

#17 page 9 – see the “Quote of the Month” section.  "As above, so below” is a catchphrase of the Hermetic Magic tradition. Kind of appropriate for the "Russian Doll" nature of the Stargraves and Morrisons.

#17 page 12 – the scorpion tattoo. Apparently, according to Grant Morrison interviews, he has the same tattoo.

#17 page 13 – the summoning of the extra-dimensional entity, refer to Zenith in “Everything...” section.

#17 page 16 – Harper of Division X is introduced into the story.

#17 page 17 – the symbolism of ancient Egyptian culture was actually on page 1 of this series.

#17 page 19 - Gideon Stargrave and Genevieve. One of the "panels of the month" (refer to that earlier section).

The original Gideon Stargrave story THE VATICAN CONSPIRACY includes sister/lover Genevieve and also Gideon dies and is reborn several times acroos the 21 pages of the mini-epic.

#17 page 21 - “What do you want?”, “Information”, is a direct quote from the Sixties Spy-fi Series The Prisoner. (Remember in issue #1 King Mob alluded to these sort of programmes.) The straw boater and piped coat that Miles wears in the dream sequences of these issues are from the programme The Prisoner, as a sort of "prison uniform" which may give some idea as to Miles's new status in this "dreamworld". What's this “Doctor Cohen” panel mean?

#18 page 1 – an incredibly dense page. What Gideon Stargrave is describing to his companion, the shamanic ritual, it's “the same ritual experience” that Dane and Lord Fanny have experienced, and what King Mob is experiencing/has experienced. His companion is also aware of he himself playing a role in this story, with a comedy callback on page 3.

Of the mythology of this ritual and of the initiate he says they “remake his body, always introducing into it some alien element, like the magic bone or stone”.

#18 page 3 - “Goodness gracious me” is the comedy callback to the idea of “Peter Sellars in gupta drag” on page 1. It's the title of a comedy song recorded by the comedian and Sophia Loren which in 1960 was a top 5 UK hit.

#18 page 6 - “a fruit club”. A fruit club being a popular biscuit in the Nineties (offsite link to lovely biscuits).

#18 page 9 – Gerry calls it Uluru, “the navel of Australia”. To King Mob: Ayers Rock is “the magic stone”. (Read page 1 again which talks of the “magic bone or stone” of the ritual.

#18 page 10 – King Mob tells Joey “I'm an initiated man” while they psychically link. Does this indicate Joey is an Invisible?

“I'm not a whitefella, Gerry. I'm a scorpion dreaming”. A clever line as of course it refers to King Mob's native Australian culture “dreaming”, but it alludes to something else perhaps. The tale of the King who dreamt he was a butterfly, or was it a butterfly who dreamt he was a King? (The theme of a fluid self.)

#18 page 11 & 12 – the fox hunt (“You're one of us now”) & “my own ...ah... memories reflected back at me”.  Was that Miles's equivalent initiation into “the Conspiracy”? (Although the bookjackets of the collected editions are keen to call it “the Conspiracy” the “other side” of the war has not been definitively given a title in these pages.)

#18 page 17 - the fish-ship in the rock. “There's ruh-red thing … kurrf … BARBELiTH?” It seems significant that it's King Mob telling the story of Ayers Rock and mentioning this to Miles as the “BARBELiTH experience” seems – like for Dane, life for Lord Fanny – to go beyond the encounter with the red circle and extend to the trials that these three Invisibles experience in the present-day storylines.

#18 page 20 & 21 – the “musk & dried flowers” ritual. There's a similar ritual in the third episode of  the Gideon Stargrave story described in the “Everything...” section.

#19 page 1 – See “Panels of the Month”. Although Grant Morrison doesn't use a pen-name, there are similarities between him and “Kirk Morrison”. Both born at the start of the Sixties. The last panel of the page has “Morrison” quoting the Sex Pistols' Anarchy in the UK (which of course gives the arc its title).

#19 page 3 – More parallels with Grant Morrison's biography with some subtle differences. The 1981 pop group was “The Fauves” rather than “The Five”. 1985 Grant Morrison was writing. The big royalties of 1988 for Grant Morrison were from the Batman Arkham Asylum graphic novel, which allowed him to travel (Katmandhu rather than India).

The whole Katmandhu experience has been mentioned by Month 3.

#19 page 8 – the symbol is that of the Zodiac's Scorpio, also used in alchemy and the Hermetic magic tradition.

#19 page 13 – Miles in straw boater and piped jacket as mentioned, allusion to "The Prisoner".


How I Became Invisible, issue title of #20

#20 page 4 - “He has some interesting ideas” - Boy's partner talking about her Hip Hop artist brother. An indication that both her partner and her brother are both Invisibles?

#20 page 6 and 7 - "That when when the scenery cracked and I saw the ropes and pulleys and wires in back of everything", "I didn't know it then but I know it now", "That was my apocalypse".

This is Boy's initiation, her braving “the jaws of the dragon” though it only gets one issue rather than a three-part arc like Dane or Lord Fanny or King Mob.

"From 1982-84 Colonel Oliver North assisted FEMA in drafting its civil defence preparations. Details of these plans emerged during the 1987 Iran-Contra scandal.

They included executive orders providing for suspension of the constitution, the imposition of martial law, internment camps, and the turning over of government to the president and FEMA."

#20 page 17 - This, presumably different, guy looks like P K Dick too, and he's on the "other side" from The Invisibles.

#20 page 23 -"I guess I'm different from the people I work with. I've been through all the psychological shit they put you through and it's still the same".

Although it seems unlikely Boy is acknowledging the idea, is this a nod to the idea that the events of this one-issue story were orchestrated by The Invisibles? She's been “put through this” as part of her initiation? Again, it's ambiguous.


Pink Floyd - Set the Controls of the Heart of the Sun

"Photographers and camera crews jostled for position on Wednesday morning as Madame Tussauds in London unveiled its Catherine and William engagement tableau." The Royal Wedding (of the Tenties rather than the Eighties) almost one year on. (guardian.co.uk)


The Day of Forever by J.G. Ballard

Recommended selections
The Final Programme
A Cure for Cancer
The English Assassin
The Condition of Muzak
(These 4 being "The Cornelius Quartet".)